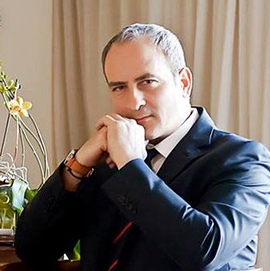 After graduating from the Medical School of the University of Rome “La Sapienza” in 1995, he returned to Greece and continued his studies in General Surgery for two years, in Intensive Care Units for eight months, in Urology for eighteen months, in Otorhinolaryngology for six months and in Orthopaedic Thoracic Surgery for six months. In parallel, he had been doing his rural medical service for two years in Chania. He was then specialized in Plastic Surgery, Reconstruction and Cosmetic surgery, at the General Hospital of Athens “G. Gennimatas “and in 2006 he obtained the title of Plastic Surgeon. He has been trained throughout the spectrum of Plastic Surgery specialty, which is quite broad and includes, among other things, Reconstructive Surgery – Microsurgery, Upper-Limp Surgery as well as Cosmetic Surgery.

To this day he has been constantly informed about the latest developments in his science and participates in a series of training and specialized seminars on the most up-to-date techniques and methods in all areas of Reconstructive and Cosmetic Surgery, with experienced and internationally acclaimed surgeons of our time.

He collaborates with the largest medical groups, clinics and private centres in the country, while maintaining his own private clinic in Athens.