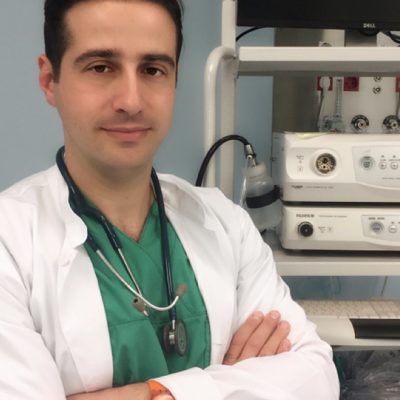 Following the successful completion of his studies in the School of Medicine of the University of Bologna, Italy, Panagiotis Anapliotis obtained his specialty in Gastroenterology at “Alexandra” University General Hospital. He completed his postgraduate studies in Clinical Nutrition at Harokopeio University of Athens, Department of Dietetics – Nutrition. He worked in various public hospitals, including 251 Air Force General Hospital of Athens, “Thriasio” Hospital of Elefsina, “Alexandra” University General Hospital, and “Amalia Fleming” General Hospital of Melissia, and then he moved on to the private sector to establish his own private medical practice. He also works as Scientific Director at the Endoscopy Department of Iatropolis in Argyroupolis, and he is a medical partner at Athens Bioclinic. At the same time, he actively participates in Scientific Conferences and Meetings both in Greece and abroad with research paper presentations, while he has published scientific papers and articles in books and journals. He is fluent in Italian, English, and French.